Just over a year ago, the Chequamegon Area Mountain Bike Association (CAMBA) joined with other local non-motorized trail groups to launch an effort to improve trail users’ ability to find their way on the many non-motorized recreational trails in Bayfield and Sawyer Counties. Significant in this initiative was developing an easy way for trail users to identify their location in the event of an emergency.

Due to the complex nature of overlapping and interconnecting ski and bike trails throughout the region, there has long been a need to devise a system to aid local first responders and help reduce response times when there is an injured or lost trail user.

CAMBA has been working with Bayfield and Sawyer County emergency management, land records, and sheriff’s offices to adopt and implement a system of Emergency Location Markers based on the U.S. National Grid that can be utilized to pinpoint a user’s location and aid in search and rescue.

The United States National Grid (USNG) location marking system is similar to the Military Grid Reference System – a location referencing and reporting system based on a grid overlay of the entire world. It has been used by U.S./NATO Armed Forces for ground operations around the world because it is much easier to use accurately and less prone to human errors than traditional GPS latitude and longitude and provides a universal language of geographic reference for emergency responders. 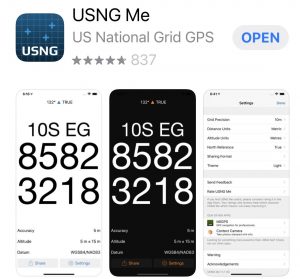 Emergency Location Marker (ELM) signs are being installed at all major intersections, key emergency access points and periodically along the trails. Now almost two years into the initiative, this formidable project has seen the installation of over 300 blue USNG signs on area ski, bike and hiking trails. It is anticipated that an additional 200-300 signs will be installed in the coming year. To date, signs have been installed in the Namakagon, Cable, and Seeley areas as well as the Lincoln Community Forest. The effort will continue throughout 2023 with the goal of also installing signs on the Hayward area mountain bike trails, Mt. Ashwabay bike and ski trails, and other trails in both counties.

The ELM system has been integrated with the County 911 dispatch system. Law enforcement, dispatchers, EMT and ambulance responders and all fire departments and search and rescue teams have received training in how to employ this system during emergencies. County emergency government offices are also incorporating ELM information in their digital and printed references, which will also identify the best access points as well as information about what type of vehicle can be used to reach an injured person.

CAMBA is in the process of launching a public information awareness campaign to let trail users know how to use the system in case of emergency. Information is now included on new maps and trailhead signage.  Trail users are encouraged to download a USNG app, such as USNG Me (iPhone) or USNG app (Android) to their phones, which works without cell coverage and will immediately tell the user their exact location on the USNG grid.